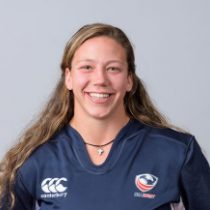 Hope Rogers began playing rugby at age 16 in high school and continued to compete during her time at Penn State University. There, she won four National Championships, was crowned MVP on two occasions, was named to the USA Under-20s and earned Collegiate All-American honors for four years. Rogers was also an impressive discus player during her senior year in high school where she broke a school record and won Gold at Districts for the sport.

In June of 2013, Rogers earned her first cap with the U.S. Women's National Team 15s against France, moving on to appear at the Women's Rugby World Cup 2014 where she earned an All-World Cup Team honor by Scrumqeens.

In 2015, she Captained the USA Eagles during their France tour and was given the Sorenson Award for Best Female Collegiate Player in the Country; moving on to win a Women's Premier League Championship in 2016 before her second World Cup appearance in 2017. The impressive athlete added more depth to her rugby resume when she made her sevens debut with the Women's Eagles Sevens at Sydney Sevens 2017.

Rogers heads into the Women's Rugby Super Series with 25 test caps and has appeared at three World Series events.