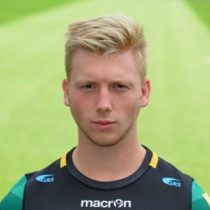 Howard Packman was signed to the Saints Academy and quickly moved up to the first team squad aged just 18 after playing in the JP Morgan Premiership 7's.

Packman represented England at Under-16, Under-17 and Under-18 ,as well as playing every match in the 2014 Under-20 Six Nations Championship.

He play represented England 7's in the final two rounds of the 2014 HSBC Sevens World Series in Glasgow and London. He was included in the victorious IRB Junior World Championship squad in New Zealand and scored the try of the tournament against Ireland.

Howard is the son of former Saints winger and center, Frank Packman, who played 376 games between 1982 and 1996 scoring 178 tries.

Northampton Saints confirmed that Packman will be leaving the club at the end of the 2016/17 campaign.

After leaving the Saints, Packman enjoyed a spell with Bedford Blues before signing Ealing Trailfinders in April 2018.