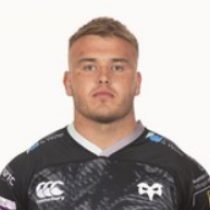 Phillips was part of the extended Ospreys squad for three years after impressing with his home club, Crymych, and in the Welsh Premiership for Neath RFC, as well as with Wales U20, winning a Grand Slam in 2016.

He made his senior Ospreys debut off the bench in an impressive 31-22 away win over Wasps in the Anglo Welsh Cup at the start of February 2017, also coming off the bench against Glasgow the same month to make his PRO12 bow.

A further 14 appearances over two seasons takes his total to 16, including a start at openside flanker against Worcester in this season’s Challenge Cup.

His leadership qualities have already been recognised, handed the captaincy of the Ospreys Development team during this season’s Celtic Cup campaign, with a personal highlight for Phillips being his hat-trick against Scarlets A at Morganstone Brewery Field.