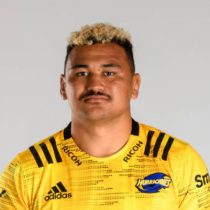 Isaia was part of the Boys’ High School squad that defended the Poverty Bay club sevens title at Rugby Park in November 2015.

Isaia is the son of Kele Leawere who capped off his remarkable career scoring a try in the win over Wales at the 2007 Rugby World Cup in Nantes, France. Like his dad, Isaia is a physically imposing lock with great athleticism.

He has made giant strides since leaving Gisborne Boys’ High School and moving to Wellington in 2016. A member of the New Zealand Under 20s team for two years and increasingly influential for the Wellington Lions.

The monster lock represented the Wellington Lions in the 2016 Mitre 10 Cup and was reselected for the 2017 Junior World Championship.

His performances during the 2017 Mitre 10 Cup earned him a Super Rugby contract with the Hurricanes.

He made his Hurricanes debut in 2018, coming off the bench against the Brumbies in Canberra.

Ahead of the 2020 Super Rugby season, Walker-Leawere has obtained 18 caps.