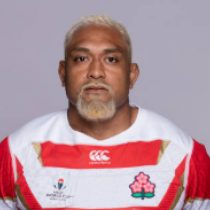 Nakajima was a teenager when he moved to Japan after he was scouted by a Japanese university coach.

The Tongan-born forward made his international debut for Japan against New Zealand on 3 November 2018.

He was included in the Japanese squad for the 2019 Rugby World Cup and he made 7 appearances in the tournament.

A powerful forward, Nakajima is known for his versatility in Japan having started in the back row before moving into the second and front row.

He ended the World Cup in Japan with eight test caps