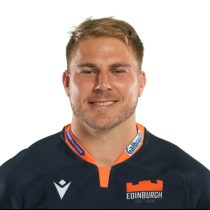 Jaco made the step up from the Lions U21 to their senior level.

The Randfontein-born flyhalf was a member of the Golden Lions squad that finished runners-up to Western Province in the 2014 Currie Cup Final and was forced to make a swift transition to senior rugby as injury cover.

He also played Varsity Cup rugby for the University of Johannesburg and remains loyal to the union, having been with the Golden Lions since U13 level and pushed hard for his Super Rugby debut against the Brumbies in 2015.

Since making his debut in 2015 van der Walt has made a total of 17 Super Rugby appearances for the Lions and in July 2017 he signed a contract extension with the franchise.

After 22 appearances for the Lions, van der Walt left the club to join Edinburgh.

He enjoyed an excellent 2018/19 campaign and finished the season as the winner of the PRO14 Golden Boot.

In November 2020, he was called up to the Scotland senior team for the Autumn Nations Cup shortly after qualifying through residency.

January 2021 saw him sign a contract extension with Edinburgh.