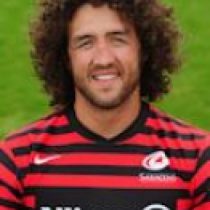 Hailing from Windhoek, Namibia, Burger is a tenacious back row forward who loves the physical aspect of the game. His professional career began in France with Aurillac before linking up with the Bulls in Super Rugby for two season. In the summer of 2010, Burger joined Saracens in the English premiership where he has been an integral part of their team ever since. The man affectionately known as the 'Windhoek Wall' made his international debut for Namibia in 2004 and will captain the side in the 2015 World Cup