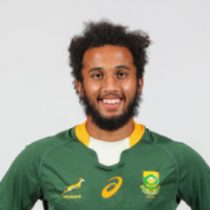 A product of Glenwood High School in Durban, Jaden Hendrikse began his professional career at the Sharks. A talented, hard-working scrumhalf, the 2021 season saw him elevated to the starting XV ahead of the promising Sanele Nohamba.

In the colours of the Sharks, Hendrikse faced the British & Irish Lions twice during their 2021 tour of South Africa. In that same year, the 21 year old achieved a significant milestone when injury in the Springbok squad saw him being called into it where he made his international debut against Argentina.