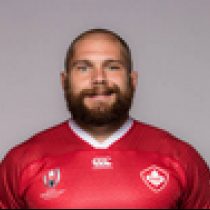 The tighthead has played 21 times for his country, including starting all three of the Canucks’ Autumn Internationals in November 2016.

He has experienced professional rugby across the world, having played for Manawatu in New Zealand’s National Provincial Championship, as well in Australia’s National Rugby Championship and in the inaugural season of the new American professional league.

Due to long-term injuries to David Wilson and Scott Wilson, Ilnicki was signed by Newcastle Falcons, making his debut in September 2017's A-League fixture at Wasps.

In April 2018, he signed a one-year deal with Championship side Yorkshire Carnegie.

May 2019 saw him sign a deal with Major League Rugby side, the Seattle Seawolves.

In November 2021, he signed a deal with Old Glory DC to fills the gap left by the departure of Steven Longwell to RFU Championship side Jersey Reds.