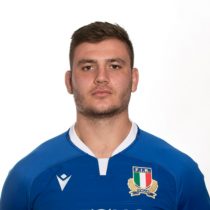 Polledri moved to Filton College, Bristol where he represented Filton College and Dings Crusaders, in addition to turning out in the Aviva Premiership A League for Bristol Rugby since 2014.

He then joined Hartpury RFC during the 2015-16 season where at senior level, during the 2016-17 season, he had a breakthrough campaign as he has played his part in what has been a tremendous season for the runaway leaders in National League 1, where he helped them earn promotion to the RFU Championship. On 2 March 2017, Polledri signed his first professional contract with Gloucester Rugby in the Aviva Premiership, which is a three-year deal ahead of the 2017-18 season.

In December 2017, he was awarded Try of the week for his try in Round 10 against London Irish.[3] He also won Gloucester Rugby’s Young Player of the Season Award for the 2017-18 Season.

On 17 March 2018, Polledri made his international debut for Italy, losing 27-29 against Scotland in their final match of the 2018 Six Nations Championship.

He was shortlisted for Young Player of the Year at the RPA Awards and Discovery of the Season at the Premiership Rugby End of Season Awards.