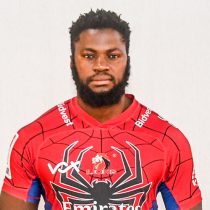 Ulengo was first noticed while he was attending primary school at Fauna in Bloemfontein. He was chosen to represent the Free State at various youth levels while he was a scholar at Hoërskool Jim Fouché. The speedy winger continues to show off his pace with teams struggling to keep him scoreless during matches.

He enjoyed a stint at the Free State Cheetahs, before making his debut for the SA Sevens side during the Scotland leg of the 2011/2012 tournament. He then signed a two-year contract with the South African Rugby Union to represent them in the 2012–13 and 2013–14 series.

2014 saw him return to the 15-man version of the sport, signing with the Blue Bulls. The hard-running Ulengo, scored 11 tries in 11 matches for the Blue Bulls in the 2014 Currie Cup.

Ulengo made his test debut against Wales in 2016 but has failed to make the squad since.

He heads into the 2018 Super Rugby season having already scored 7 tries in 20 appearances in the competition.

Ulengo made 3 appearances for the Bulls in 2018 scoring 2 tries before he signed for the Cheetahs for a brief stint during the Pro 14. Ahead of the 2020 Super Rugby season he made a move to the Lions