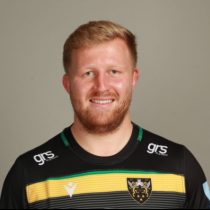 James Fish began his rugby journey in his hometown Derby at just eight, before rising through the Saints Academy ranks and signing his first senior Club contract ahead of the 2019/20 season.

A former member of the Saints Senior Academy whilst he later developed his game as a Sixth form student at Trent College, during which he was a NatWest Vase winner at Twickenham in 2014.

Fish made his debut against Newcastle Falcons in November 2016 before scoring twice during an Anglo-Welsh Cup fixture against Scarlets.

The hooker also helped Northampton’s ‘Wanderers’ side lift the 2017 Aviva 'A' League trophy, after defeating Gloucester United in the final.

It was during the 2018/19 campaign, where the hooker took his opportunity in an injury-struck Saints side, that Fish really broke into the first-team – adding some 24 appearances and three tries to his tally with Saints securing their first knock-out rugby in four years, and Fish starting the Premiership semi-final against Exeter Chiefs.

Fish is contracted to Northampton Saints until 2021.