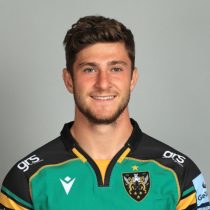 A frank admission comes from James Grayson, who plays at fly-half in the same position as his father Paul, the winner of 32 caps and scorer of 400 points for England from 1995/2004. He was also a member of the triumphant 2003 RWC squad.

He was educated at Northampton School for Boys and at Moulton College, where he was rugby captain, and is a new member of Northampton Saints Academy for 2016/17. He played for the Saints in the Singha Premiership Sevens in August in 2017. James has also been on loan for Old Northamptonians where his grandfather first took him at the age of four.

Grayson continued his great form into the England under-20s side, featuring in both the 2017 and 2018 Six Nations and World Rugby Under-20s Championships for England. Grayson also helped the Wanderers lift the Premiership Rugby A League trophy in both 2017 and 2018, defeating Gloucester United and Exeter Braves in two consecutive finals.

But it was under new director of rugby Chris Boyd that Grayson really got his chance; the No.10 made 18 appearances in the 2018/19 season, scoring his first senior try against Bristol Bears in the Premiership Rugby Cup, claiming that competition’s Breakthrough Player award on the way to helping Northampton lift the trophy – the Club’s first silverware in five years.

In December 2018, he signed his first senior contract with Northampton Saints. By 29 November 2019, he already had 37 appearances scoring 221 points.