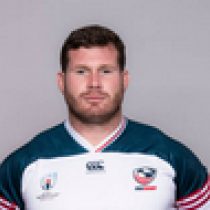 Hailing from Adelaide, Australia, Hilterbrand is a dynamic hooker who gets around the park extremely well considering his 17st frame. Having previously played for the amateur side Manly Marlins in the Shute Shield, Hilterbrand signed a professional contract with the Western Force in 2013. He makes his debut for scottish club Edinburgh in the 2013/14 season.

In November 2015, it was announced that he was one of South African Super Rugby side the Kings' new acquisitions prior to the 2016 Super Rugby season.

It was in 2016 that Hilterbrand made his Men's Eagles debut, coming in as a substitute in a Americas Rugby Championship win against Canada at Dell Diamond.

He signed a contract with the Waratahs the same year before being included in the USA squad for the 2017 Americas Rugby Championship.

In May 2017, Hilterbrand was named in the USA Men's Eagles squad for the Emirates Airline Summer Series and Rugby World Cup 2019 Qualifiers this June and July, with 7 caps to his name.