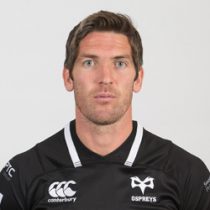 With quality distribution skills and superb tactical awareness, Hook is built in the mould of a traditional Welsh flyhalf with his exciting feet and running play. A stylish operator throughout his career, Hook left Wales to further his career in France with Perpignan in 2011.

After being relegated with Perpignan in the 2013/14 season, he joined Gloucester for the 2014/15 season. Born in Port Talbot, Hook became Wales' third highest all-time points scorer behind legends of the game Neil Jenkins and Stephen Jones.

He was ever present in the Grand Slam side of 2008, played three times in the 2012 Slam and won three further caps as the Championship was retained in 2013. Hook missed out on the Welsh World Cup squad but was called up after an injury to Scott Williams.

Having left Ospreys as a 25-year old, Hook signed a deal that saw him return to his home region at the end of the 2016/17 season.

In January 2020, he revealed he will retire from rugby at the end of the season to focus on a series of rugby-themed children's books, as well as a career in coaching and was appointed Skills and Kicking coach at Ospreys in August 2020