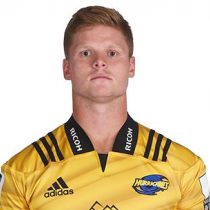 A former New Zealand U20s international James O'Reilly made his mark on the Mitre 10 Cup in 2016 and earned a contract with Super Rugby franchise the Hurricanes.

He made his Super Rugby debut in the final regular season match against the Crusaders. O'Reilly managed to make one appearance for the Hurricanes during the 2017 season and was not contract for the 2018 season.