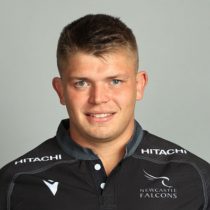 Blamire was a relative latecomer to rugby union after playing rugby league during his youth in Workington, where he eventually switched codes and played for Workington Zebras.

County recognition followed with Cumbria, and at the age of 16 he moved over the Pennines to join the Falcons’ AASE scheme at Gosforth Academy. He signed his first senior academy deal with the Falcons in the summer of 2016.

The Cumbrian hooker is a graduate of the club's AASE scheme at Gosforth Academy, who has been capped by England at Under-18s and 20s level. He was named in the England U20 squad for the 2017 U20 Six Nations tournament.

Progressing onto a senior academy contract and the 2019/20 season onto a first-team deal, Blamire also represented England Under-20s in the Junior World Championship in Georgia in 2018. Making his first-team debut for Falcons from the bench during the 2017-18 European Challenge Cup win in Bordeaux, Blamire appeared a further two times from the bench that year before helping the Falcons to the final of the 2018 World Club 10s in Mauritius.

He scored the try which sent the Falcons through to the semi-finals of the Premiership Rugby Cup at Sale Sharks in February 2019, also scoring on his Premiership debut at Gloucester in May 2019 after coming on as a back-row replacement. Part of the squad which helped the Falcons to the 2019 A-League final, Blamire was named Academy Player of the Season for 2018-19.

In February 2020, he signed a new deal with Falcons Rugby. He helped the Falcons to promotion in 2019-20 and playing 18 games during the 2020-21 season, he scored on his full England debut against the USA in July 2021 just three minutes after coming on as a replacement, following up with a hat-trick in his second cap against Canada the week after.