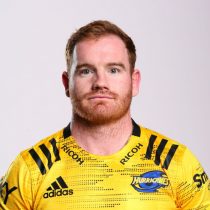 Booth was earmarked for a big future at Palmerston North Boys' High School. He played for the New Zealand Secondary School side and was contracted to the Manawatū Turbos while still at school.

But his first year out of school he had a serious dislocated knee which saw him sidelined for over a year.

He has played 32 games in four years with the Turbos, but it was his consistency when it came to challenging opposition around the fringes of the ruck that made him standout in 2017.

During the 2015 Super Rugby season, Booth was called into the Blues squad as an injury replacement but didn't make any appearances.

Booth made his debut in July 2016 against the Southern Kings coming on as a substitute for the Highlanders after stints in England playing for Newcastle Falcons.

In 2017, he represented New Zealand in the Paris 7s & was named in the Hurricanes squad for the 2018 Super Rugby season.

Booth took his Super Rugby cap tally to 12 by the end of the season and in December 2018 he signed for the Sunwolves for the 2019 season.

Jamie currently plays as a halfback for the Sunwolves in Super Rugby and Manawatu in the Mitre 10 Cup.