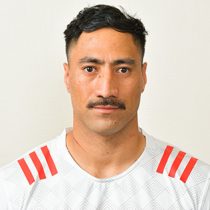 A New Zealand born outside back, Jamie Henry grew up in Auckland and made an impression at schoolboy level which drew interest from Japan.


In 2009 Jamie had been accepted for a rugby scholarship for Rissho University, in Japan.


Post Graduation 2013. Jamie signed with the Japanese company P.S.I based in Tokyo.


He trained regularly with the Japanese 7s side and went on to feature for the side in the World Sevens Series in 2014.


He also went on to represent Japan at the 2016 Rio Olympics.


Henry has been a mainstay in the Toyota Verblitz since 2014 and in 2018 his form was finally rewarded with a test call up.


He made his test debut for Japan during the 2018 November Internationals against the country of his birth, New Zealand, starting on the wing and scored a try.


A month later he signed a deal with the Sunwolves and will look to make his Super Rugby debut in the 2019 season.