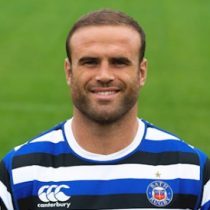 The 2009 Lions Tourist was one of Roberts' stand out performances in Europe. Mixing brute force with on field intelligence, Roberts is the ideal modern centre.

The qualified doctor made his Wales’ debut in 2008 and was been an integral part of The Lions, Wales and Cardiff Blues squad since. In 2013 Roberts was selected to once again tour with the British an Irish Lions, where Gatland may be tempted to rekindle the Roberts/O'Driscoll centre partnership which received such rave reviews in South Africa.

The ability and size of Roberts means he is exceptionally hard to stop from crossing the gainline, an attribute identified by Lions management, leading to his selection in all three Lions tests at inside centre in 2013. The same year saw him move to Paris to play with Racing Metro.

In May 2015, Roberts announced that he was moving to Harlequins after the RWC, where he added to his 70 caps for his country.

After the 2015 Rugby World Cup, he began a Master of Philosophy in medical science at the University of Cambridge. This entitled him to play rugby for Cambridge and he was selected for The Varsity Match which took place in London on December 10, 2015.

As Wales attempted to play a more expansive style of rugby, Roberts was dropped after the first match of the autumn campaign against Australia and finished it on the bench against South Africa.

He was named in the Wales squad for the 2017 Six Nations.

In May 2017, Roberts was named as Wales captain to lead his country on their summer tour against Tonga & Samoa, with 91 caps to his name.

In March 2018, Bath Rugby announced the signing of Roberts following three years with Harlequins. After 34 appearances for the Club, he agreed his move to Super Rugby side the Stormers and headed to the Southern Hemisphere with immediate effect.

Roberts featured in all six of the Stormers 2020 Super Rugby matches, starting all six, before the season was called off. On his return to Wales, Roberts signed with the Dragons.