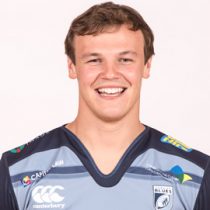 Jarrod Evans progressed through the Cardiff Blues ranks since he was 14-years-old.

The talented playmaker has been capped by Wales and Youth and Under-18 level and made his debut for Pontypridd when aged just 17 in 2013.

Evans was part of the Wales Under-20 squad that took part in the Junior World Championships in the summer of 2015 in Italy. He made his senior debut against Glasgow Warriors in 2015, having previously represented Cardiff Blues and Wales throughout the age-grades.

Despite being hampered by a broken jaw through the middle of the 2016 season, young fly-half Evans was still awarded a new long-term contract due to how highly he is rated by the Cardiff Blues management.

With only two league and European appearances 2016 after a breakout 2015/16, Evans pushed Steve Shingler for the backup berth to Wales international Gareth Anscombe, and showed off some of the attacking flair that he provided in pre-season. The former Coleg y Cymoedd pupil continued to gain valuable game-time with Pontypridd before enjoying a breakthrough 2017-18 season. That culminated in winning the European Challenge Cup with Evans pulling on the number 10 jersey throughout and his fine form was recognised with the 2018 Discover and Players’ Player of the Year awards.

He has gone on to firmly establish himself as a key figure with 88 appearances and 508 points to his name, while he has also now won six Wales caps. (as of April 2021)

He signed a new long term deal with Cardiff in April 2021.