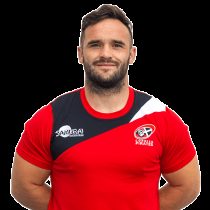 Welshman Jean-Baptiste Bruzulier has experience in the Championship having helped Worcester Warriors to promotion back in 2015.

He captained the Warriors in their British & Irish Cup triumph that season and played in both legs of the Championship play-off final win over Bristol.

Bruzulier, who played his junior rugby with Llandaff North, Llandaff and St Josephs before having spells with Cardiff Blues and the Dragons at U16s and U18s, has respected Wales at age-group and sevens level.

After moving to Filton College in Bristol, he had a year with Saracens on an Academy contract in 2011, turning out for Old Albanians and Wales 7s, before moving to France, where he signed up with second division club Le Pays d’Aix.

Whilst at Le Pays d'Aix, he spent time at Toulon on trial where he was mentored by Jonny Wilkinson.

He returned to England in 2014 from French side Le Parc to join Worcester on a two-year contract where, as well as helping them back to the Premiership, he also spent time on loan at Clermont Auvergne.

He made a permanent move back to France with Nevers in 2016.

In April 2018, he signed for Yorkshire Carnegie.

The following season he signed for rivals Cornish Pirates and left the club in May 2021 following 18 appearances.