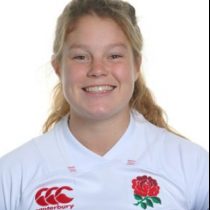 An extremely talented player, Jess Breach grew up in Chichester and started playing rugby at age six at Chichester RFC. She won the European Sevens with England U18s in 2014 and 2015 and captained the talent development group side against Canada.

She was invited to England camps at the age of 16 and secured a spot in the England U18 training squad. Breach joined Aylesford Bulls Ladies in 2016, where she won a league and cup double before the club merged into Harlequins Women.

One of the most threatening players in the world game, Breach was one of the first players to join Halrequins in its inception in 2016 winning a League and Cup double as one of the original Harlequins Women.

Breach made an instant impact on her international debut scoring a staggering six tries against Canada at Allianz Park in November 2017. The wing has featured 22 times for the Red Roses dotting down a remarkable 25 times and will be looking to continue her fine international form ahead of the Rugby World Cup in New Zealand next year. She won the 2020–21 Premier 15s with Harlequins but missed the final due to an ankle injury


Harlequins Women confirmed that Jess Breach hads re-signed with the Club ahead of the 2021/22 Allianz Premier 15s season.