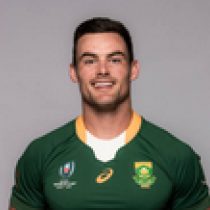 An extreme athlete, Jesse Kriel has become renowned for his powerful ball carries, solid defence and high work ethic. Now a test international, Kriel played for his school's first XVy at Maritzburg College and went on to represent the Sharks U18 and South African Schools team in 2012. The fullback then signed for the Blue Bulls after school and represented the province in the Vodacom Cup before a call up to the South African U20s for the IRB Junior World Championship in 2013.

Kriel has rugby coursing through his veins with his great grandfather John Hodgson playing for the British and Irish Lions while his twin brother Dan also plays rugby professional.

After a great season at full-back for the Bulls in Super Rugby 2015, Kriel earned a call up into the Springbok RWC training squad and was surprisingly named at outside centre for the match against the World XV at Newlands.

He made a huge impact in the backline both on attack and defence. He was included in the Springboks RWC Squad later that year, scoring his first test try in the 44th minute of the match.

His versatility has been key for the Springboks with his ability to slot into inside centre, when needed, while he has started on the wing for the national side. However, he has been a regular at outside centre.

Kriel played 70 Super Rugby games for the Bulls before signing a deal with Canon Eagles, who he joined after the Rugby World Cup. He took his test cap tally to 46 during the Rugby World Cup in Japan but suffered an injury in the opening game against New Zealand and missed the remainder of the tournament as the Springboks went on to win the World Cup.