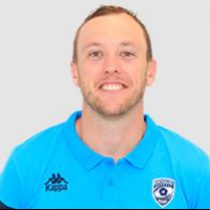 A Queensland native, Mogg attend St Patricks in Brisbane, the same school as prolific Wallabies try-scorer Drew Mitchell. After representing the Australia A Schools side in 2006, Mogg was picked up by the Brisbane Broncos, featuring heavily in their Toyota Cup squad in 2009.

Known as the Greyhound for his slender build and long stride, Mogg’s ability to break the line saw him score the Brumbies try of the season in 2012, with a chip- and-regather finish against the Sharks at Canberra Stadium.

He joined the Brumbies Academy a year later, with trials against the Reds in Darwin and the Hurricanes in Canberra following over the next 12 months. Complimenting his elusive running skills is an enormous left boot which has proved handy in kicking for goal or clearing out of enemy territory.

In a vote taken by all first grade coaches at the end of 2011, Mogg’s name was the only one to appear on every ballet paper providing Jake White with a clear indication of the high esteem in which his young fullback was held.

In May 2015, Mogg turned down a new three-year-deal with the Brumbies and decided to join French side Montpellier on a two-year deal. In 2016, twice capped Wallaby extended his contract at Montpellier under Jake White up until 2018.

In June 2018, Mogg left Montpellier after three seasons and continued his career in Europe as he joined TOP14 rivals Pau on a three-year deal.