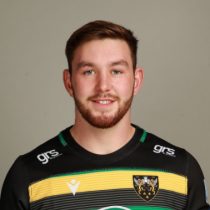 JJ Tonks joined Northampton Saints in the summer of 2019 from Gloucester Rugby.

Brother of Gloucester and England 7s player Mason, the back rower has played rugby since he was introduced to the sport at Millfield Prep School.

Tonks linked up with the Cherry & Whites’ Academy at just 12 years old, before progressing at Cheltenham and captaining at Hartpury College – where he studied for a Level 3 Extended Diploma in Rugby and helped the side win the prestigious AASE League in December 2017.

He has international recognition to his name after representing England 7s at the 2017 Commonwealth Youth Games – collecting a silver medal alongside future Saints teammate Ollie Sleightholme.

Tonks also turned out for England Under-18s in 2018 before enjoying a stint in New Zealand training with the Otago Mitre 10 Cup team, playing for the region's Under-18 and Under-19 sides in the process.