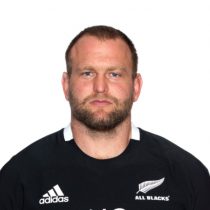 Joining the Crusaders after two championship-winning seasons with the Canterbury provincial team, Moody has made his mark in the loosehead prop position during the 2013 season. With the Crusaders he receives invaluable mentor-ship from Canterbury stalwart and All Black Wyatt Crockett.

As a former rugby league junior and New Zealand wrestling representative who won a junior Commonwealth Games bronze medal and competed at the world junior championships, Moody is no pushover when it comes to scrum time. Having represented the NZ Maori, Moody, went on to win the RWC with the All Blacks in 2015.

Although he missed out on initial selection in the 2015 Rugby World Cup squad, injuries to both Tony Woodcock and Wyatt Crockett saw him called into the team and he fronted with the best of them. He now has over 40 Test caps to his name.

On 27 June 2016, the loosehead prop re-signed with New Zealand Rugby and his Super Rugby club, Crusaders, for another three years through to 2019.

In June 2017, the Crusaders front-row was named in the All Blacks squad for the DHL NZ Lions Series.

Now in his eighth season of Super Rugby with the Crusaders, Joe has more than 80 Crusaders caps.