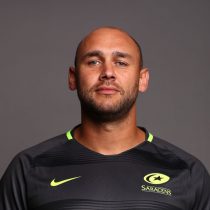 Born in the West Midlands, Joe Shaw played for Sale Sharks as a youngster and won England representative honours at Under-18s, 19s and 21s, and was in the full England sevens squad in 2001.

A utility player with a broad range of skills, Shaw played fullback, wing and in the centres during his career. Shaw kicked off his professional career at Sale Sharks before leaving the club for Northampton in 2000.

He left Saints two years later to join the Newcastle Falcons where he had more success playing 83 games and scored 52 points. A memorable moment for many will be the try he scored in the Falcons' victorious 2004 Powergen Cup win over former club Sale at Twickenham.

A recurring ankle injury picked up early in the campaign saw him miss much of the 2004/5 season, restricting him to six starts and five outings from the bench.

Shaw used his time away from playing rugby to help the Falcons Community Foundation to good effect, winning the Falcons community award six years in a row from 2003 to 2009, while he was also named Powergen Community Player of the Season for 2006-7. Furthermore, was the first Rugby Player inducted into the Show Racism the Red Card charity.

Away from the Falcons, Shaw coached local side Westoe RFC, from 2003-2009 along with former Falcons star Richard Arnold. Winning three league titles, two County Cups and reached the final of the Powergen Intermediate Cup.

Shaw joined Saracens as an Academy coach and moved into his role as Skills Coach for the senior side in the summer of 2013.

He has since played a key role in Sarries’ ability to execute skills and has had a marked effect, alongside Backs Coach Kevin Sorrell, on the club’s attacking proficiency.