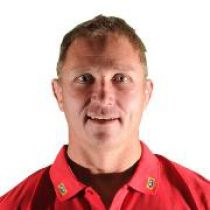 A former Springbok lock, Ackermann started his playing career at the Police College in Pretoria, where he was known as an aggressive and abrasive lock before earning accolades as the highly successful Lions rugby coach.

Ackermann played 13 Tests for the Boks in a career spanning from 1996 to 2007 and also played for the Blue Bulls, Griquas, the Lions and the Sharks.

He enjoyed a stint with the Northampton Saints between 2001 and 2002.

Under his coaching, the Golden Lions went unbeaten through the Currie Cup season in 2015.

June 2016 saw Ackermaan being appointed as head coach of a SA ‘A’ team for their two-match series against the England Saxons.

His success at both Currie Cup and Super Rugby level was recognised in South Africa where he was named South African Coach of the Year in 2014, 2015 and 2016 and was Head Coach of South Africa A last season.

In 2016 the Lions finished 2nd on the overall Super Rugby log and went all the way to the final where they were beaten by the Hurricanes.

In April 2017, Ackermann announced that he will be leaving the Lions at the end of the Super Rugby season to join Premiership side Gloucester Rugby.

Ackermann enjoyed a fine start to his first season with the club helping them to the Challenge Cup Final and made it to the Premiership semi-final during the 2018/19 season before he signed a new long term deal with the club.

However, Ackermann would leave Gloucester in May 2020 after reported unrest in the squad and left for Japanese Top League club Red Hurricanes.