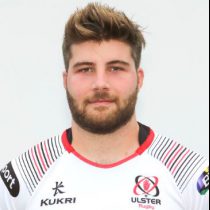 Born in Ballymena the hooker has come through the Ulster development system and made his debut in the senior side in September 2015 against Ospreys.

An athletic and intelligent forward who leads from the front row, he further cemented his place in the squad with some formidable displays for the Ulster ‘A’ side.

At the start of the 2017/18 season, he had made 28 appearances for Ulster scoring two tries.

When the Pro 14 was brought to a halt in 2020, Andrew had started one game and come off the bench a further 6 times.