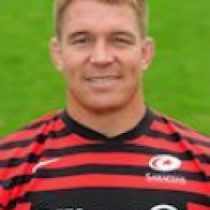 The most capped Springbok of all time and a living legend of the game. Smit is a born leader and captained teams throughout his life, including the Springboks to their rugby World Cup triumph in 2007.

He starred in the Sharks team for more than 10 years and has won accolades, titles and praise wherever he has gone.

He is a quality hooker, also able to pack down at both tighthead and loosehead prop and a real force in the Saracens scrum. His wealth of experience and wonderful character of a real asset.