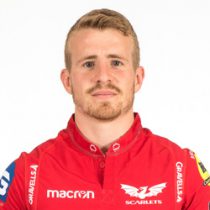 Evans represented Wales Under 18s against England and Scotland and then went on to be the only Dragons player in Darren Edwards’ Welsh Under-20s side in the Six Nations, being joined by Lewis Robling and Jamie Solis in the Junior World Cup, scoring a try against Italy and is one of the regions brightest prospects.

The 2011/2012 season has seen Jonathan involved in the Dragons squad but his appearances have been limited because of more senior players Wayne Evans and Joe Bedford.

Jon has made a number of substitute appearances in the second half of the season for the Dragons. He has been playing for Bedwas RFC in the Premiership when not involved with the region.

In April 2012 he was named in the Wales Under-20 squad for the Junior World Cup in South Africa, and signed a deal with the regional side the following year.

Evans’ debut season at the Scarlets saw him make 24 appearances including appearances off the bench in both the Guinness PRO12 semi-final and final in Dublin.

He scored five tries in his first season in West Wales and has continued his good form into the 2017-18 season making ten appearances by 10 January.

In January 2018 Evans signed a new deal with the Scarlets.