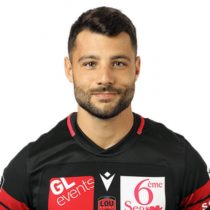 After living in Souillac and started playing club rugby in the small town of du Lot, Pelisse's talent was spotted Brive, who he joined in 2007.

He joined Grenoble as injury over during the 2009/10 PROD2 season but remained at the club until 2013 before Montpellier signed the talented scrumhalf/flyhalf.

Pelissie made 34 appearances and scored 141 points for Montpellier before signing up with Toulon in 2015, where he made 36 appearances between 2015 and 2017 scoring 231 points.

In May 2017, Pelissie traded Toulon for Lyon and has continued to thrive at the top level of French rugby and helped the side qualify for the Champions Cup for the first time.