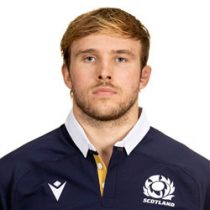 Gray joined the Warriors in the summer of 2012 on the back of standout displays for Hamilton and Scotland under-20.

The younger brother of former Glasgow favourite Richie Gray, Jonny spent a period of time before his arrival at the Warriors training and playing in New Zealand, having been named as one of the recipients of the 2012 John Macphail Scholarship.

He was called up to the Scotland U20 set-up at the age of 17 in 2012 and was made captain when he returned to the national age-grade squad in 2013 for the 6 Nations. He received a call-up to the Scottish squad for the Six Nations in 2016.

Following the 2015 RWC, Glasgow announced that Gray would stay with them until May 2018 on a new contract.

The lock has won over 50 caps for Scotland and has become a mainstay in the side and has consistent excellence for club and country.

The Glasgow Warriors co-captain was a force in the engine room as Scotland fell to an agonising 23-22 defeat to Australia - leading the team with 24 tackles and 13 ball carries.

A member of the national team's leadership group, Gray led the side to a win over Argentina 19-16 at Murrayfield before receiving a call up to the Scotland squad for the 2017 Six Nations tournament.

In May 2017, after unfortunately missing out on the B&I Lions Tour - Gray was included in Gregor Townsend's first Scotland squad for the three-Test tour.

The youngster went on to score in the games against New Zealand and Australia.

In December 2017, he signed a new two-year contract with the Glasgow Warriors before receiving another call-up for the 2018 Six Nations. Gray featured in all but one of Scotland's 2019 Six Nations matches before producing a recording-breaking performance against Leinster where he made 43 tackles.

He played at a second World Cup, in Japan in 2019, starting three of Scotland's matches in Pool A. Early in 2020 he announced a move to Exeter Chiefs on a 2-year contract. After playing in the first two games of the 2020 Six Nations, Gray sustained a hand injury ruling him out of the rest of the tournament.

Gray left Glasgow to join Exeter after making 110 appearances for the club scoring 12 tries. During his time with Glasgow: he played 7,992 minutes, attempted 1,494 tackles at an average of 15.0 tackles per 80 minutes played. In his PRO12/14 his career tallies are 993 tackles made and just 13 missed. (Stats via: Kevin Millar from ontopofthemoon.com Twitter handle: @topofthemoonGW).