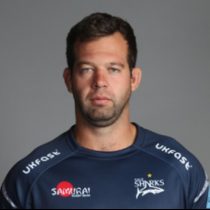 Beaumont joined Sale Sharks in the summer of 2012 on a dual-registration deal with Fylde after a spell in the Newcastle Falcons academy.

He made his Sharks debut against Montpellier in January 2013, the first of two appearances in 2012-13. Though he favours playing in the second row, he showed his versatility by making his debut at Number Eight.

At the time, Beaumont was still studying at Durham University and had captained England Students. After a number of good outings for his club side Sale Sharks, the son of former England captain, Bill was given the opportunity to follow in his fathers footsteps when he was selected for the 2016 Six Nations squad by Eddie Jones.

On July 25th, 2016, Beaumont was appointed as Sale Sharks captain and also signed a three-year deal.