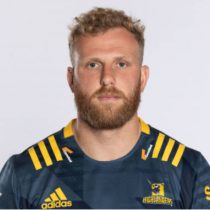 Dickson represented New Zealand in the 2013 IRB Junior World Championship in his home country and signed for Otago in 2014.

He made his senior debut playing for the Otago Razorbacks in the 2014 ITM Cup where he made 3 substitute appearances before becoming more of a regular the following year.

Solid performances for Otago over the course of three provincial seasons put him on the radar and was signed by the Highlanders for the 2017 Super Rugby season.

Dickson didn't make his Super Rugby debut in 2017 but came off the bench for a 26-minute cameo in the historic win over the British and Irish Lions.

Josh earned his first Super Rugby cap 2018 and will be wanting to challenge the established locks to add to his current cap tally.

A tall, athletic lock he has benefitted from a solid season of Mitre 10 Cup rugby with Otago where they defended the Ranfurly shield the majority of the 2019 season.

Since his debut in 2018, the 2m lock has scored three tries and will be looking to add to his tally.