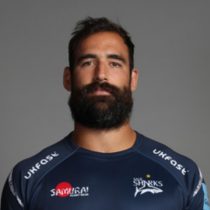 A powerful athlete and leader, Strauss is one of the most exciting signings in the history of the Warriors, and has committed to the Scotstoun club until at least the end of May 2015.

Strauss represented Boland on the Western Cape at under-19 and under-21 level before spending a year in France with Lons-le-Saunier. He made his Currie Cup debut in 2010, and impressed to the extent that he was handed both the Currie Cup and Super XV captaincy in 2011. Josh Strauss signed for Glasgow Warriors in September 2012 and has since has amassed 83 appearances for the club.

He became eligible to play for Scotland in September 2015, and was named in the 31 man squad for the 2015 Rugby World Cup. He made his much-anticipated debut from the bench in the team's opening match victory over Japan and has currently has 5 caps to his name. His debut in the RBS 6 Nations came off the bench in round 3 v Italy last year. Made his first start for the following round in the victory over France and was a replacement in the final round.

In January 2017, he was included in Scotland's squad to compete in the 2017 Six Nations tournament, where he would like to break his points duck and add to his 3 caps. The following month saw Strauss being one of 3 players to be released by Glasgow Warriors at the end of the 2016/17 season after 104 appearances for the club. Josh has been capped eleven times by Scotland after making his international debut against Japan in the 2015 World Cup at Kingsholm.

Sale Sharks announced the signing of Josh Strauss on a three-year deal from the 2017/18 season. In May 2017, Josh was included in Gregor Townsend's summer tour squad, where he added to his 11 caps before joining up with his new club.

Ahead of the 2019 Six Nations, Strauss has 17 test caps. In July 2019, Sale Sharks confirmed to have come to a mutual agreement with Strauss so that he can be released from his contract two years into a three-year deal with the club.

Strauss turned out on loan for Stade Francais after missing out on Scotland's Rugby World Cup squad before joining the Bulls for the 2020 Super Rugby season.

He made 6 appearances for the Bulls on his return to South Africa before he was departed the Bulls after the parties came to a mutual agreement.

Glasgow Warriors Try of the Season 2017