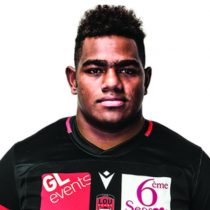 Tuisova began his career in Fiji playing for top local 7's side, Westfield Barbarians which was captained by his older brother and former Fiji sevens player, Pio Tuwai.

In July 2013, he was signed on by the top Top 14 side, Toulon and made his debut the following month against Racing Métro 92.

His abrasive approach to the game and destructive ball carrying earned him the nickname 'the bus'.

His efforts with Toulon was reward with a new four-year deal in 2015. He also earned a selection to represent the Fiji squad for the 2016 Summer Olympics, where he won a gold medal.

A year later he was called into the senior test side and made his test debut against Scotland in Suva.

The dynamite winger continued to shine for club and country and went on to play a vital role in the Barbarians 45-63 win over England.

Tuisova confirmed that he would join Lyon following the conclusion of the 2019 Rugby World Cup.

The powerful winger was superb at the Rugby World Cup scoring two tries in three games and ended the tournament with 13 test caps and 6 tries.

He heads into his debut season with Lyon with 22 European caps and 4 tries.