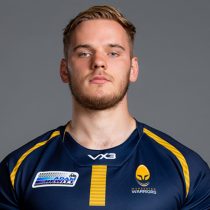 Clegg came through the Warriors age-group sides and has represented England at Under 17 and 18 levels.

He made his first team debut off the bench in the Anglo-Welsh Cup win over Bristol before playing against Wasps in the same competition the following week.

Clegg has been named in the England U20 squad for the 2017 campaign having joined the Warriors Senior Academy ahead of the 2016/17 season before being promoted to the first-team in the summer of 2018.

The giant lock combined his Academy rugby with a place at Durham University where he studied History and made his first-team debut in November 2016 in the Anglo-Welsh Cup against Bristol Rugby at Sixways.

Clegg was also part of the England Under 20s squad which won the 2017 Six Nations and also reached the final of the World Rugby Under 20 Championship, where they were defeated by New Zealand.

The former Bromsgrove School student missed most of 2018/19 season with a stress fracture of the back but made impressive progress the following season season and by the start of January 2020 he has made six senior appearances, including his first start in the European Challenge Cup victory over Enisei-STM.