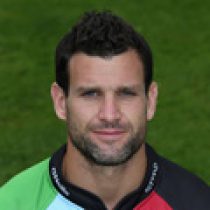 Joining Harlequins in 2009 from Bedford Blues, Dickson has made an invaluable contribution to the Club in his time, helping Harlequins to its most successful period on the field in winning the 2011 Amlin Challenge Cup, the 2012 Aviva Premiership, and the 2013 LV= Cup.

The Salisbury-born Sports Science graduate has been a central figure within the squad during international periods, and has captained Harlequins during Anglo-Welsh campaigns.

He was twice called into the England Elite squad during the 2011/12 season and, during the 2012 summer tour to South Africa, he appeared in the second mid-week match against the South African Barbarians, replacing his younger brother, Lee, currently of Northampton Saints.

In addition to playing the sport at an elite level, Dickson has used his exceptional rugby brain to benefit other areas of the game at all levels, by turning his hand to both coaching and refereeing.

Karl has announced that he will retire from professional rugby at the end of the season.