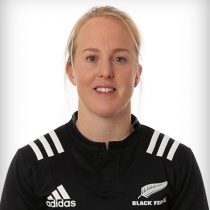 Originally from Taranaki, Cocksedge made her first class debut for the red-and blacks in 2007. She had a solid campaign with Canterbury in the Farah Palmer Cup.

Cocksedge made her Test debut at 19 and went on to become the most experienced member of the Black Ferns backline.

She was the 2015 World Rugby Women’s Player of the Year and in 2016 took up a Women’s Rugby Development Officer role with New Zealand Rugby, focused on growing the game in the Crusaders region.

Also a skilled sevens player, Cocksedge has been named in the Black Ferns squad for the 2017 Women's World Cup, where she will look to add to her 37 caps.

Cocksedge took special pride in winning her first Farah Palmer Cup title with Canterbury in 2017 and then defending it in 2018.

In December 2020, she was named as the Farah Palmer Cup Player of the Year.