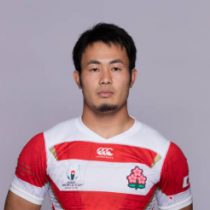 A speedy player who is a member of the Japanese 7's team, Fukuoka scored 2 tries on debut. Injuries hampered his rugby but recovered and made a good comeback and was a part of the 2015 RWC Squad.


The speedster has since become a regular in the Japanese Test squad.

In December 2018, he signed a deal with the Sunwolves for the 2019 season and entered the new season with 13 caps.

Fukuoka was also included in the Japanese squad for the 2019 Rugby World Cup, held in Japan for the first time.

He won the man of the match award in Japan's victory against Scotland in the 2019 Rugby World Cup on 13th October 2019; a victory which saw Japan reach the tournament's knock-out stage for the first time in its history.

With 38 appearances for Japan and scoring 25 test tries Fukuoka announced his retirement from the to focus on his medical studies. He bowed out we a Top League title in 2021 where he scored a try in the final.