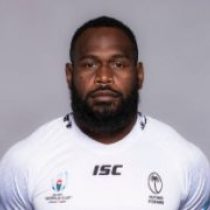 Botia's game is summed up by his nickname, "Demolition Man".

One of the most multi-skilled players in the game being able to play in the pack and in the backs at the very highest level.

The battering ram Fijian, got his big break when Fijian rugby player and coach Waisale Serevi included him in his sevens team for the 2011 Pacific Games and he hasn't looked back since.

Botia worked as a prison officer having not go to high school as he was determined to focus on his rugby career and the risk paid off.

He made a try-scoring test debut against Portugal in Lisbon in 2013 in a comfortable 36-13 victory before he headed off to France joining La Rochelle initially as injury cover in March 2014.

After a month he had convinced the staff, his team-mates and the fans of his abilities and was signed on a full contract which has since been extended until 2022.

He went on to represent Fiji at the 2015 Rugby World Cup, starting Fiji’s final two games at RWC 2015, against Wales and Uruguay and entered his second World Cup in Japan with 14 test caps and 5 tries for Fiji.

As of September 2020, Botia has made 119 appearances for La Rochelle and has scored 110 points.