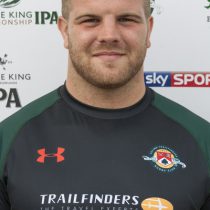 Thiede joined the Ealing Trailfinders for the 2016/17 season. His experience from having spent time at Doncaster Knights and London Scottish has greatly benefited the Trailfinders in the Championship campaign, with the prop slotting straight into first choice, making 27 appearances in his debut campaign.

Another formidable scrummager, Thiede joined Bristol Bears ahead of the 2018/19 campaign and added stability and power to the Bristol set-piece.