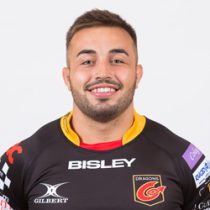 Belcher is a promising player who made his debut for Cardiff Blues in the Anglo-Welsh Cup in 2014 and went on to be capped for Wales U20s during the Junior World Championships in 2015.

Belcher returned to his home region a season later, making his PRO14 debut against Cheetahs, and also played a crucial role for Cardiff Blues A in the inaugural Celtic Cup campaign.

As of May 2020, he has made 14 appearances for Cardiff Arms Park side and has scored 5 points.