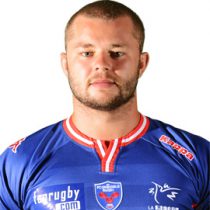 Having worn the No 2 jersey for Leinster and Ireland, Jammes made his debut for Grenoble in the 2015/16 season.

He became one of three Grenoble players named in France’s 30-man development squad in July 2016.

A young talented hooker Jammes made 18 appearances for Grenoble in the 2016/17 Top 14 season but he was unable to help his side avoid relegation.

He made 4 appearances for Agen during the 2017/18 season and left the club at the end of the season for Brive.