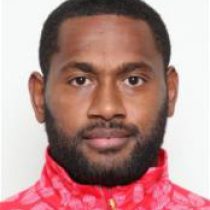 Being Fijian-Australian, Tuqiri represented Australia in both rugby league and rugby union, and Fiji in rugby league.

He has made appearances for Waratahs in the Super 14, and Leicester Tigers in England in season 2009–10.

Tuqiri is the cousin of his namesake, Fijian-born Japanese Rugby Sevens player Lote Tuqiri, and was included in the Japan 7s squad for the 2016 Summer Olympics in Rio.