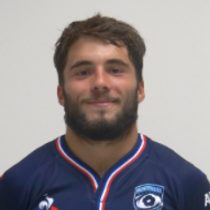 Louis Foursans broke into the Montpellier senior squad in late 2020 after a flyhalf crisis at the club.

He was elevated into the Montpellier senior side in November 2020 and made his debut in the TOP14 via the bench against Bayonne having just turned 18.

He made his first start a week later against Bordeaux and his Champions Cup debut in December against Leinster.

After his impressive start with the senior squad, he signed an extension with Montpellier until 2023