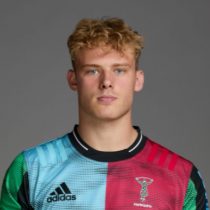 Son of former Wallaby great Michael, Louis Lynagh is an exciting outside back comfortable at 15 or on the wing.

Born in Treviso, Lynagh is eligible for England, Italy and Australia. Lynagh joined Harlequins at the age of 13 and had his first taste of international rugby with the England U16s, U18s and U19s.

He made his debut for Harlequins during the 2019/20 season featuring twice for the club that season.

2020/21 was a breakout season for the fleet-footed speedster as he made 11 appearances for the Club scoring six tries.

He scored a try in the Premiership semi-final against Bristol and did one better a week later scoring twice in the final 10 minutes to guide Harlequins to victory over Exeter.

Lynagh's form was rewarded mid-season as he signed a long-term contract with the club.