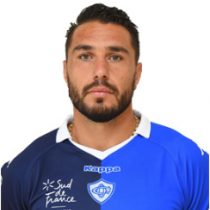 Ludovic Radosavljevic was born on 17th August 1989 in Avignon, France.

In 2007, he began his rugby career with Pays d' Aix RC before moving onto Clermont the following year.

Aged 29, the scrum-half has been at the club since 2008 and has represented Clermont on over 175 occasions.

As of the 2018/2019 Champions Cup, Radosavljevic has had 38 European Cups appearances.